TLC is back. Not the channel—it's the fierce nineties all-female R&B group.

They jumpstarted a comeback when they signed a new deal with Epic Records, Antonio "L.A." Reid's latest label. Reid was the one who initially signed the the super-trio—Tionne "T-Boz" Watkins, Rozanda "Chilli" Thomas, and the much-missed Lisa "Left Eye" Lopes—to LaFace Records in 1991.

And today we found out more about the inevitably great resurgence, even though it will be missing Lisa "Left Eye" as she tragically passed away in a car crash in 2002. In a New York press conference, the two remaining members confirmed that they will release a greatest hits album on October 15 of this year.

The album will include remastered and redone versions of their classics (Think "Waterfalls" and "No Scrubs."), as well as new tracks written by Lady Gaga, Ne-Yo, and featuring artists Drake and J-Cole. There's pretty much no way to go wrong here.

If that's not enough of a TLC injection for you, have no fear. VH1 is going to release a biopic entitled CrazySexyCool: The TLC Story. It's been a while since the last TLC Behind the Music in 2004, and we're banking on this being an even better viewing experience. 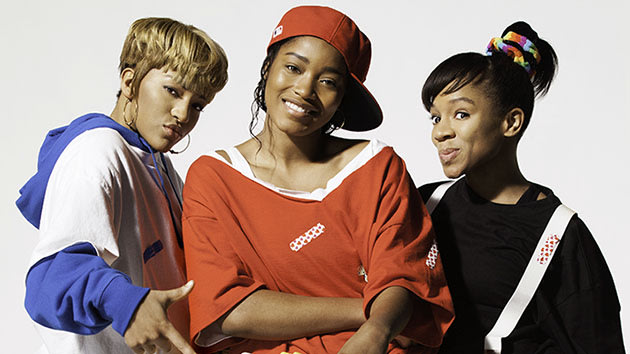 As for the Tupac-esque rumors that the group will use a hologram to feature Left Eye? Don't count on it. Chilli wasn't exactly a fan of the idea: "I don't even know how that got out. It's definitely something we thought about, like years ago. But I think it's very creepy. We're still in the creative process in figuring out how we're going to involve Lisa and stuff like that."

They will also be performing for the first time in four years this weekend at the Mixtape Festival in Hershey, Pennsylvania. At least for now, Left-Eye's biopic counterpart Lil Mama will be filling in on stage.

And just in case you somehow forgot about TLC's amazing music, videos, and outfits, here's the "Waterfalls" video: