Sources says that both of the real-life gangsters were gay and that one murdered his beard/trophy wife.

Famously mythologized in Morrissey’s “The Last of the Famous International Playboys,” Ronald and Reggie Kray (a.k.a. the Kray Twins) were a pair of gangsters brothers who started The Firm, a gang that ran East London’s underworld in the 1950s and '60s. They also both happened to be gay, reports England’s The Daily Mail. Tom Hardy will portray both of them in the upcoming film, Legend.

"I've got to work out how to play both twins, which will be fun,” said Hardy when he was confirmed for the role. “It's another experiment and I'm really looking forward to it.” 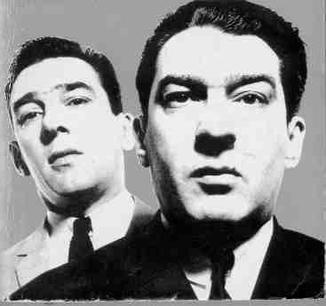 According to former enforcer Freddie ‘Brown Bread’ Foreman, who has been spilling tales about the twins to Hardy, not only was Ronnie gay—he came out in his teens—but Reggie was as well. While it has long been known that Ronnie was gay and that Reggie may have been bisexual, Foreman says that Reggie was in fact gay. Furthermore, the former Firm enforcer claims that Reggie never consummated his marriage to Frances Shea. “That poor girl was a trophy wife, nothing more,” laments Foreman. Shea killed herself two years into their marriage. Bradley Allardyce, a prison friend of Reggie, claimed that Ronnie told him that his brother had murdered Shea by forcing her to swallow pills.

It's not the first time Hardy has played a closeted outlaw. He famously played Handsome Bob in Guy Ritchie's RocknRolla, a closeted thug who had a crush on Gerard Butler's character. In 2008, he told Out: "They just made me want to snuggle Gerard a bit tighter, lick his top lip a bit." We can't wait to see what he brings to both of these roles. It's sure to be unforgettable.

The Daily Mail has a video of Tom and Emily on set.

dance
This Is the Male Dancer from Ariana Grande’s Grammy Performance
January 26 2020 10:55 PM