Coming Out & Coming of Age in Geography Club

The movie Geography Club—based on the first book in Brent Hartinger's bestselling The Russel Middlebrook Series—includes some familiar faces: Cameron Deane Stewart (Pitch Perfect), Justin Deeley (Drop Dead Diva, 90210), Alex Newell (Glee), and Nikki Blonsky (Hairspray), along with other young actors who can still remember the struggle of growing up different in high school. Which is important since, except for the map-printed bordering on the classroom's coarkboard, Goodkind High School's "Geography Club" has nothing to do with geography. In fact, it's a secret support group for students struggling with their sexual identity.

"It’s definitely a movie that all of us feel very passionate about and feel like it’s one of those movies that needs to be in the world—because it’s positive and because it can be helpful," says Gary Entin, the movie's director. "There are still plenty of high schools where kids feel uncomfortable to be themselves—and that’s a problem. We hope this movie can play a part in erasing those sentiments by showing how normal it is. The film's rated PG-13 so we can teach that lesson to a younger audience, which is the time where I feel that lesson needs to be taught."

With so many looking for inspiration and protection against bullies, we asked Entin to discuss many of the film's choices, including bullies, gender and sexual fluidity, and why high school remains such a tough place to this day.

On how the film Geography Club compares to the novel…

Nothing was ever to improve on the book. Some of it was just our own personal spin, or what we thought would work better on-screen as opposed to the novel because they are such different mediums. For example, in the movie Russell is on the football team, and in the book he’s on the baseball team, and that’s simply because him and myself thought that something like football makes for a much more cinematic sequence than baseball.

If you read the book and watch the movie, you’ll feel like you’re getting the same experience—anything that’s been changed has only added to Brent’s concepts, not taken away from them.

On the continued need for gay/straight alliances in schools…

Throughout the development of the script, we visited many different GSAs to get the flavor of what they were discussing and how those meetings went down. The actual Geography Club scenes were so vital to the film, and we wanted to make them very realistic.

Even though it is more prevalent these days to have a GSA in high school, we, unfortunately, still live in a country where it isn’t always supported. We still live in a world where that battle is being fought, and the town that we’re highlighting in the film is a town where this isn’t something that’s necessarily embraced.

We definitely had an amazing casting director, Alyson Silverberg. I actually have to give credit to Frederick Levy, the film’s executive producer. He had seen Alex on The Glee Project and emailed me the YouTube clip of him singing, way before this movie was officially green-lit, saying, “This kid is Ike,” and actively pursued putting Alex on tape. I was like, “Oh my god, you’re absolutely right, he is Ike.”

Our casting director brought Nikki to us, and she put herself on tape in New York. It’s funny, you have that sense when you’re casting a movie like, Nikki Blonsky, we know her from Hairspray. But, out of all the actresses we saw, on her own merit, she was the most appropriate for the role; she was making choices and doing things with the character I hadn’t seen before. We’re really lucky to have her be part of the project.

On the subject of "bisexuality" in the film…

The film is not in any way saying that bisexuality isn’t real; I very much believe that it is real. That’s also not to say that maybe some of these characters aren’t bisexual— whether they do or don’t discuss it in the film. Ike’s going from saying he’s 80%-straight-20%-gay to, by the end of the film, saying he’s 100% gay deals with the fact that we all have our own ways of coping with different parts of ourselves. Just because somebody else might think something about us doesn’t mean that’s where we are. So, just because another character says, “Yeah, we knew it all along,” doesn’t mean he necessarily knew it all along. We all get to where we need to get at our own pace.

On the bigoted, bullying character of Nolan, played by Grant Harvey…

I mean, I think small-minded people come in different forms; just because you’re small-minded about one issue doesn’t mean you’re that way for all issues. It’s kind of ironic how somebody like Nolan can have a respect for women and, yet, when it comes to homosexuality and whatnot, he’s completely closed off. Maybe if you have a girlfriend, you can understand what it is to treat a girl correctly. Sometimes, someone can be so clearheaded and in the right on one particular issue and bigoted or ignorant on something else. I think that’s a very real trait in people.

On why it's more than a love story…

I think that Russell and Kevin’s journey in the film is very much a love story, but no, it’s not a romantic comedy. The movie is about being different, you know? It’s sort of a coming-of-age story for many different characters. It highlights how whether you’re gay, or whether you’re looking for a girlfriend, like Gunner, or you just feel like an outcast, like Brian Brund, there’s something about everybody that makes them feel like an outcast.

None of us really are when you put it in that context; even the high school quarterback feels like an outsider, which is true. But, I feel like it not being just a love story, I don’t think it effects it one way or another, quite frankly. It’s a movie about all the problems that we deal with in high school, and sometimes beyond high school, that really makes us all one—which, is something I feel like all ages tend to forget sometimes.

Geography Club will be released to select cinemas and VOD on November 15. For more information, visit GeographyClub.com 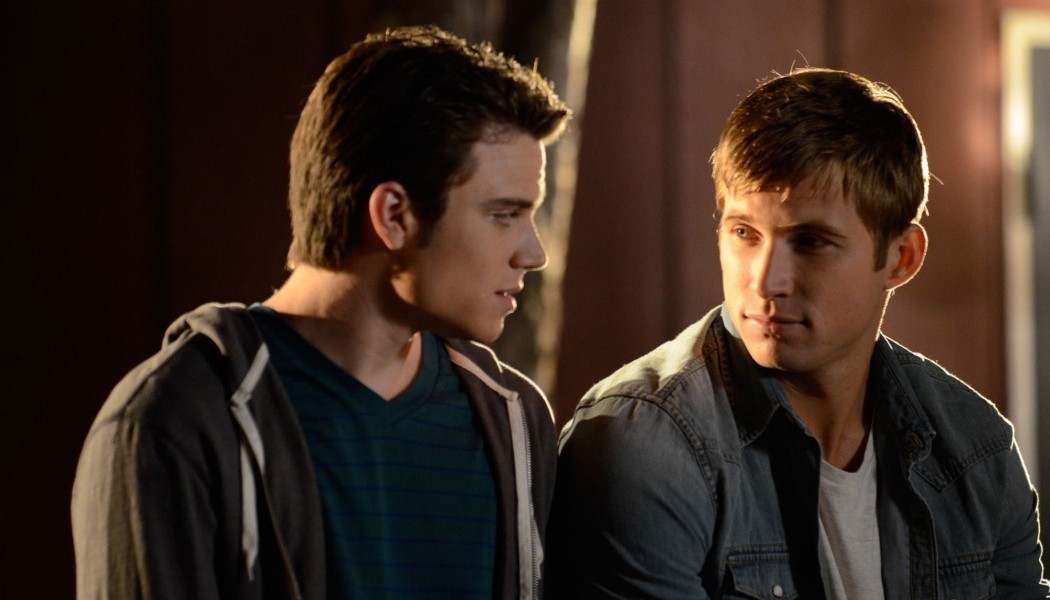