Behind the Candelabra Author, Scott Thorson, Returns to Prison Matt Damon as Scott Thorson in 'Behind the Candelabra'

A Nevada judge has sentenced Scott Thorson, former lover of Liberace and author of Behind the Candelabra, to eight to 20 years in prison for failing a court-order drug test while on probation for identity theft and burglary convictions. Variety reports that Thorson, who was portrayed by Matt Damon in the critically acclaimed 2013 HBO TV movie, had repeatedly failed drug tests and did not show up at a court-ordered treatment facility.

Washoe District Judge Patrick Flanagan originally suspended Thorson’s prison sentence in July and even gave him another shot after testing positive for methamphetamine in September. Thorson failed two drug tests in October and one in November. He was arrested November 19 after failing to appear at a drug treatment facility two weeks prior.

Thorson missed the premiere of the HBO film in May 2013 because he was in prison at the time. As the New York Times reported, he had been held here since February 2013, after he was charged with burglary and identity theft, "after buying about $1,300 worth of computer and cellphone merchandise using a credit card and license that weren’t his." He was arrested at the Ponderosa Hotel, where he and a man he had just met rented a room for $33.90 a night.

“We get a lot of the dregs of Reno, a lot of prostitutes, drug dealers,” said Eric Pyzel, a clerk at the Ponderosa who works next to a bumper sticker that reads “Welcome to Our Country. Just Do It Legally.” “The cops are by pretty often. So when they got here it was kind of like, O.K., what is it this time?”

After he was released on bail in May by Dennis Hof, the owner of Nevada's Bunny Ranch, Hof contacted Out magazine, curious if we might be interested in paying Thorson for rights to his story. He was told that the magazine doesn't purchase interviews. Hof said that he wanted to make sure that Thorson was receiving proper care and treatment for his stage II colon cancer and that the women at the ranch took pity on him after they saw him portrayed in the HBO dramedy. 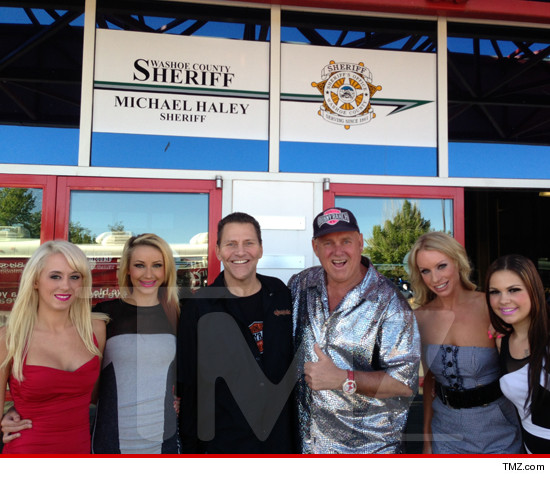